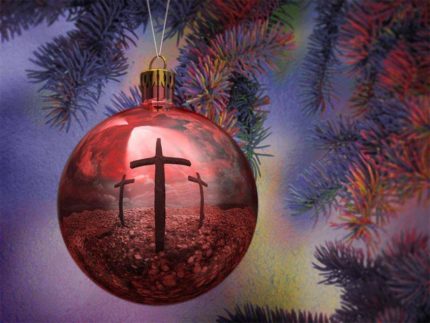 In a few days it will be Christmas and a lot of us are going to be around friends and relatives who we see only at this time of the year. Many of those people will be unsaved and because of the season, they will be more receptive to spiritual things than they would at other times of the year. It’s a good opportunity to share with one or more of them what Jesus has done in our life.

After all, this could be the last chance we have to see them. We never know when death will part us forever. Some of those people are just waiting for someone to come up to give them a hug and say, “Everything’s going to be OK. I love you but there is Someone who loves you very much…His name is Jesus. Do you know Him?”

So, as families gather this Christmas they will be standing around Christmas trees admiring the decorations and the gifts below.

Christians are the family of God and though most of us have Christmas trees in our home, what we are really celebrating is our “Christian Tree”.

Let’s think about our tree. It’s on a hill a city called Jerusalem in the nation of Israel. It’s not much to look at. It’s made of wood and isn’t even finished or sanded smooth. It’s really rugged looking. It’s not much of a tree because it only has two branches. One on the left, and one on the right. It’s not something most people would have in their home as it just isn’t very appealing. Some people are even offended by it. To them it just stands there on that hill for what seems forever.

A lot of people shy away from it. But for those who are really curious you can see more than an old tree. From a distance you cant see them but, as you get closer to the tree you notice there are some decorations or ornaments on it.

They’re very simple. There are two nails driven in at the end of each branch. One here….one there.

Two nails down at the bottom.

Then there seems to be something hanging from the top. I can see points, it must be a star….no it looks like a crown. But there are sharp-pointed thorns all around it.

This tree seems to be void of all color.

All except one, red

It’s covered from top to bottom with red….it has even trickled down the tree to form a pool at the bottom. It’s there at the bottom of the tree we can see some gifts. Let’s open them and see what they are.

I think I see one with your name on it.

We open it up and we see it’s something you always needed….something to wear…maybe a coat, or a shirt….no it’s a robe. The word “Righteousness” is embroidered in gold thread down each sleeve. And in various places on the robe are words like, “Justified”, “Sanctified”, “Holy”, “Pure” and “Redeemed”.

Let’s look at the tag to see where it was made. It says, “Made in Heaven From the Foundations of the World”. Here’s something added, “One Size Fits All!”.

There are many more gifts at the foot of the tree Lets cheat a little bit and shake them like we used to do when we were kids. (Okay, I still do it.) But I can tell what’s in the next gift…its A Word Of Wisdom. Then another is the Word Of Knowledge.. There’s one that I would like to see working. its the gift of Miracles….and there’s another one, its the Gift of Healing.

You know, this is fun. Why would anyone say that gifts were only for a short time? People say gifts were given on the Day of Pentecost so people would come to the Lord and then they ended. Doesn’t the Lord still want people to come to Him? I am grateful we found this tree and the gifts still there.

Some of the gifts don’t have names on them. They just say, “To Whomever Will Receive”

The first one says, “Baptism in the Holy Spirit” and the next one says “A Prayer Language”.

You know, I can even see a bowl of fruit under this tree. Each fruit has a label on it.

The first fruit we see is as big as a watermelon and is labeled very simply, “Love”.

Then there’s one called Joy.

You know, instead of eating them one at a time, let’s make a fruit salad so we can enjoy them all at once. I just feel that’s the way they were intended.

Well, we’ve opened our gifts and eaten the fruit. We’ve celebrated Christmas around a Christian tree which stands long after Christmas is over. The price of this tree must have been very high but we don’t have to replace it every year. The Manufacturer guarantees it for eternity.

Who does this tree belong to? The Name of the Owner must be on it somewhere. I didn’t buy it. And you didn’t either. Lets see if we can find a tag on it and see who it belongs to.

At the top, just under the crown of thorns hanging there, I see a sign. I can read the words, they say, “Jesus, King of the Jews”, but someone, maybe an angel, has crossed those words out and added… “Jesus, the Son of God! The Alpha & Omega, the Lion of Judah, the Seed of the Woman, the Rose of Sharon & Lily of the Valley. The Son of Man, Son of Mary & Son of God. The King of Kings and Lord of Lords!”

Well, that’s the Christian Tree.  It stands forever because it’s for all seasons, for all people, for all of eternity.

This Christmas, and in fact every day, let’s be sure and tell others about our “Christian Tree!”