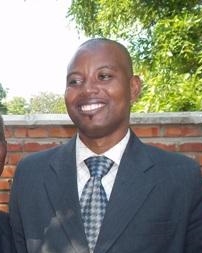 I like to tell the story of how John became acquainted with our ministry.  It must have been between 15 to 20 years ago that someone donated a brand new Bible to the ministry.  It was a duplicate of the Bible I had bought many years ago and because of the notes and use, mine had degraded quite a bit.  I was happy to receive the new Bible and believed God had sent it as a gift.  And what a gift!   It was leather bound and printed on India paper, a rarity today.  Since 1875 India paper has been made from bleached hemp and rag fibers that produced a very thin, tough opaque white paper, enabling a publisher to get 1000 sheets per inch.  The new Bible became my prized possession and I kept it in the original box until that day when I really needed it to replace my old Bible.

In those days I was printing Gospel tracts in my print shop and sending them to various locations overseas, including Kenya, Malawi, and Ghana in West Africa.   We received many letters requesting more tracts, Bibles, and other literature to help people understand the Word of God.  During one period, we were getting an average of 50 letters per day.

One day I after the mail came, I opened one letter and began reading it.  The letter was from John Harrison.  I don’t remember the content of the letter except that John explained what he was doing for the Lord at that time.   The letter was much like hundreds of other letters we had received but suddenly while reading this one, I heard these words, not audibly, but within my soul: “Give that new Bible to him, he is going to have a great ministry”.

I stopped reading and thought about what I had heard, “Give that new Bible to him, he is going to have a great ministry”.  Then I began to argue with God, “But that’s my Bible!  Wasn’t it a gift to replace my old one?”  But no matter how much I rejected the idea of giving away the Bible, those words kept coming back.  I finally gave in and emailed the ministry director in Accra,  Boachie.  I explained the letter and said I was mailing the Bible to the office and asked Boachie to get in contact with John Harrison.

Boachie received the Bible, got in contact with John.  John met Boachie for the first time and was presented the Bible.  Then, John signed up for our Bible school, attended classes, received a diploma and was ordained into the service of the Lord.

Since that day, many years ago, God has worked mightily through the ministry of Rev. John Harrison and yes, God’s words have come true, John does have a great ministry and surprisingly after all these years, my old Bible is still good!

Thank you, John, for your loyalty to God, to His Word and to this ministry.  May God continue to use you in even greater ways for His glory! 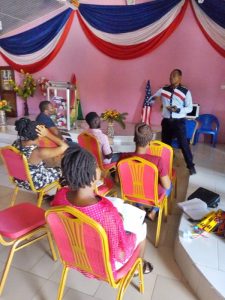 Above: John teaching the new class at Kwabenya in Accra 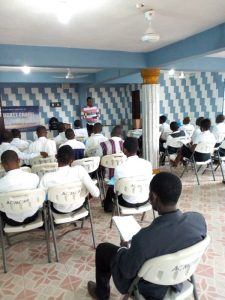 Above:  John teaching at the class at Kade