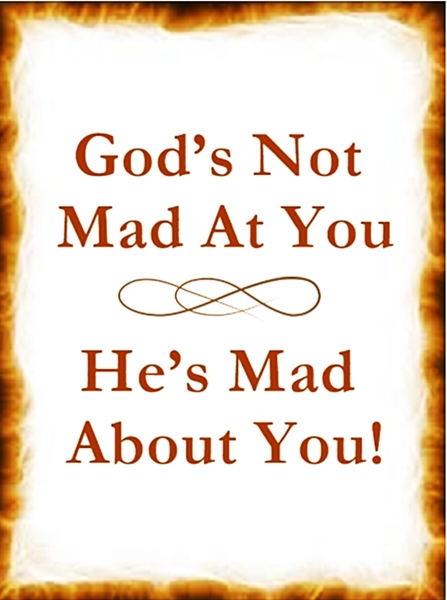 (Please note:  This tract is being used today in West Africa.  It is a simple explanation of the Gospel and the love God has for the sinner)

Some people go through life, believing that God is mad at them. They blame God for every bad thing that happens to them.  When death comes, they believe that God is just waiting to send them to Hell. Maybe you have believed this yourself. Listen, friend, God is not mad at you. That is a fact. Another thing, the bad things that happen to you in this life are usually the doings of the Devil, not God. Sometimes the things that happen to us are a result of our ignorance or carelessness.

The Bible makes one simple statement that sums it up. It says God is love.  (1 John 4:8).  Then, it says, God SO LOVED the world that he gave his only Son, that whosoever believes in him should not perish but have everlasting life! (John 3:16)

Does that sound like God is mad at anyone?  No, God loves you very much.  He loves you, and He has proven it time and again.

Let’s look at just a few:

The 1st time He showed His love for you was before creation.  Before He created anything, God the Father and His Son, Jesus, agreed together in a plan that would guarantee you a place in Heaven.  The plan was to happen in God’s timing.

The 2nd time God proved His love for you was after God created the earth, the trees, the animals, and everything else and after He created the first man. God named him Adam. He gave Adam a garden to live in peace and good health forever. Then God gave him authority over every creature on earth and gave him a wife and named her Eve.  The only thing Adam & Eve had to do to keep these things and maintain their authority over them was to obey God in one law. That law was not to eat the fruit of one tree in the garden called the Tree of Knowledge of Good and Evil.

Adam did not obey God, but instead, he ate the fruit of the Tree. By doing this Adam lost his authority, his peace, his health, his eternal life and his right to live in the Garden of Eden. Adam and Eve should have died the day they disobeyed God; that was what God told them would happen for their disobedience. But God loved them both very, very much. He even loved their descendants, the children who were yet to be born. That includes you. So God spared the lives of Adam and Eve. But something had to die as the penalty for sin, so God killed an animal instead of Adam and Eve. By doing this, God would make a way for His plan to work.

The 3rd time God proved His love for you was when God sent His Son, Jesus, to earth. Jesus came to put their plan into effect; Jesus came to earth to save anyone who would listen to the plan and believe in His authority to make it work.

The 4th time God proved His love for you was when His Son, Jesus, refused to turn from their plan for you. He was tempted many times, and one time, in another Garden called Gethsemane, the temptation became so great Jesus almost gave up on the plan. Then He thought of you and how much He loves you. He also thought of His Father and what a great love He had for Him.  It was then that He decided that, regardless of the pain and suffering, He would go through with the plan.

The 5th time He proved His love for you was when soldiers arrested Jesus. He didn’t try to run away from them, and He didn’t argue even though He knew what was going to happen to Him.  Later they put a crown of thorns upon His head and pressed it down until blood flowed. They beat and whipped Him. They finally led Him up a hill where they nailed His hands & feet to a cross.  Then they lifted Him up and stood back to watch Him die a painful death.   The soldiers thought Jesus would curse them as others had done but they didn’t know of the love Jesus had for them.  Instead of cursing them, Jesus asked His Father to forgive them for what they had done.

If it had not been for His love for you, Jesus could have called down thousands of angels to kill every soldier who had punished Him.  Even from the cross, He could have destroyed every city of every nation with nothing else but His spoken command.  But you would not have been born if He had done that.

He could have come down from that cross at any time but you would not be able to enter Heaven if He had done so.  Because of His great love for you, He chose to hang there on the cross to bleed and suffer until He died.

That was the 6th time He proved His love for you when He died on the cross.  That set the plan into effect. He took all the punishment for your sins and now, because of His love, you have a CHOICE of where you spend eternity. Either Heaven or Hell.

Jesus didn’t stay dead long. He rose from the dead, walked away from His grave, and went to Heaven, where He now sits at the Right Hand of His Father and prays for you.

If you believe that Jesus was the Son of God and that He died for you, it is only a matter of praying and asking Him to forgive you of your sins. That was the plan that began before creation. You deserved to die and go to Hell, not only because of your sins but because you were a child of the first sinner, Adam. If you ask God to forgive your sins, you become a new child, a child of God’s and no longer Adam’s. THE God of all creation is a God of love, and He is not mad at you. Six proven facts have established that.

There are many little gods in this world, but they are demons (followers of the Devil). The Devil is an enemy of the One True God. The Devil is the one that is mad at you. He hates you, he hates your family, and that will never change. The Bible says the Devil is the father of lies. (John 8:44) He wants you to believe that the One True God is mad at you. The Devil is also a deceiver, a master of hate, death, destruction, sickness, disease, poverty, war, murder, and everything evil. There is not one ounce of love in him.

Finally, the 7th time Jesus proved His love for you is when He promised to return one day and take everyone who received Him as their Savior to Heaven to spend eternity with Him.

Some day in the future, maybe even before this day ends, Jesus Christ is coming back to earth.  Then the Devil will be thrown into Hell, a lake, a fire where he will suffer for all of eternity.

Who will you serve? The God Who gave His Son to die for you or the Devil who wants to see you burn with him in Hell forever? Is that such a hard decision to make? It shouldn’t be too hard to realize who hates you; it’s the Devil.

In the Bible, it says, “I call heaven and earth to record this day against you, that I have set before you life and death, blessing and cursing: therefore choose life.” (Deuteronomy 30:19)

Friend, you have read about God’s love for you and His plan that made way for you to have a place in Heaven.

Heaven is a choice.  You can’t work your way into it.  It’s not a matter of keeping the Ten Commandments because no man or woman can keep them.  To break one commandment is to break them all,  and to break any at all is a one-way ticket to Hell.  That is unless you take advantage of the plan that God and His Son have already worked out for you.  The work has been done, and nothing you can do can add to it.  So don’t try to work your way into Heaven.  Just accept the fact that God loves you. He’s certainly not mad at you, and He has given you the choice of Heaven as a gift because of His great love for you.

To make that choice, pray the following prayer:

“Dear Jesus, l have sinned, and I am sorry.  I know now that You do love me and are not mad at me. I believe that You are the Son of God, that You died for me, that You rose again and now sit at the Right Hand of your Father in Heaven. Help me to live the life You would have me to live.  Send Your Holy Spirit to live in me and to guide me. Thank you. Amen”

Congratulations! You are now a Child of God and going to Heaven.

Now find a church that believes in the same thing that you have just read and begin going to services.  There you will learn more about God’s love for you.  It’s also important for you to get a Bible (God’s book of love for you) and begin to read it.  Ask God for help to understand it, and He will.