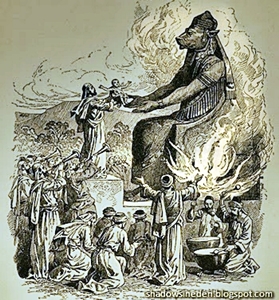 Have you ever wondered how God could have commanded Joshua, as the leader of the Children of Israel when they were entering Canaan, to kill all of the inhabitants of that region? The key to understanding His instructions is knowing who those people were and what they were like. They were known as Canaanites, but there were also other cultures such as the Hittites, Girgashites, Amorites, Perizzites, Hivites, and Jebusites.

A common god worshiped by all of these people was Bel, also known as, Baal and Beelzebub. Their religion consisted of sexual perversion, including bestiality, self-mutilation, drunkenness and worst of all, child sacrifice. They actually believed they were doing the right thing worshiping their god by burning their children alive in the fiery arms of a brass image of Baal. In addition, they also buried the bodies of sacrificed children at the threshold of a new home, believing it would bring good luck and prosperity.  These are just some of the known aspects of their “religion”.

God (being omniscient) knew they were beyond conversion. He also knew the Children of Israel would be tempted to mix with the Canaanites, inter-marrying and adapting to their forms of religion and in doing so, would reject their true God, the God of Abraham, Isaac and Jacob.

God knew the only solution was to wipe the Canaanites and other debased cultures off the face of the earth, and He would use the Israelites to do it. But the Israelites didn’t carry out their duty and eventually mixed with the Canaanites, inter-marrying and adopting their worship of Baal by sacrificing their own children to him. These actions brought condemnation upon the Children of Israel and God would have to deal with them. But that’s another story. Hopefully you now have a better understanding of why God told Joshua to kill off the people living in the land promised to Abraham’s descendants.

God is a loving God, but He is also holy, which means there is no evil in Him and He cannot associate with anything or anyone that is evil.   The sin of Adam runs through the veins of natural man/woman and that separates us from God.  The only way we can come to God is to become holy just as He is holy.  The only way for us to become holy is by faith in Jesus Christ, His death and resurrection.   Faith and not works, is the key to heaven.