On the first day, the team reached out to nine souls and three people gave their lives to Christ! A woman who had severe pains in her eyes was healed instantly when the team prayed for her.

On the second day, the team spoke to fourteen souls and four people gave their lives to Christ
and a woman who has started going to church was encouraged. They also visited some drug addicts who directed the outreach team to their workshop the previous day.

On the third day, the team spoke to seventeen souls, both old and young and one woman gave
her life to Christ.  She stopped going to Church some years ago and had become a dealer in Indian hemp (a type of marijuana).  She was down-hearted and wept when she was receiving Christ as her Lord and personal Savior.

On the fourth day, the team reached out to eleven souls, four rejected the word of God but three drug addicts gave their lives to Christ! A few others were encouraged through the Word of God.

On the fifth day, a deliverance service was conducted by the team at Kasoa Methodist Church.
By the power of the Holy Spirit, one woman was delivered from the spirit of death!
On the sixth day, the team spoke to eight souls and two people gave their lives to Christ! One
of the two was a girl who confessed that when she was thirteen years, it occurred to her to smoke Indian hemp (marijuana) and she did it. She is now eighteen. She said anytime she tried to stop smoking it she received stripes all over her body. She sometimes sees strong men beating her in her dreams. The team prayed and counselled her. 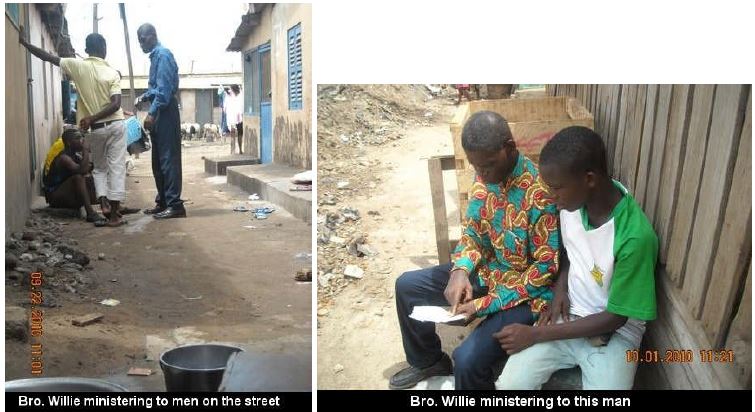