CMM outreach team set off to Kisseman, a suburb of Accra in the Greater Accra region from
the 24th to 27th of February 2010 for their usual evangelistic activities.  It was a follow-up as
well a soul-winning program.

On the first day, God miraculously healed /delivered a young girl of about fourteen years from
an incurable coughing problem. The parents had taken her to several hospital and doctors
but could not be helped. They had as well taken her to so many prayer camps but did not any
solution to the problem. The family was now confused and did not know what to do next.
They even made up their mind to give up. The first time the team visited the family the father
of the girl left the house in displeasure, with a feeling of annoyance and dislike but the mother
listened to them. This time too the moment the team entered the house the father again left.
The mother again had time for the team. At the end of their studies, the mother told the team
the problem of her daughter. The team prayed for the girl and was instantly delivered from
her illness. While prayer was going on the girl started coughing and vomiting phlegm with
very bad odour, a very unpleasant scent or smell. The girl was at this time completely regained
her health, freedom from the disease.

When the father returned and saw his daughter coughing and vomiting (being delivered) he
also started praying for God to forgive him. The team visited the family again the following
day.  This time around the father gave them an audience and studied together with them. He
further promised to start going to church. The girl also confirmed her complete healing. As a
result of the girl’s healing, the whole family and other children in the area gave their lives to
Christ. When it was time for the team to leave the house they insisted that they spent more
time with them.

The team again ministered to a certain drug addict. While ministering to him the Spirit of God
gave them a word of knowledge concerning a man of God in Ghana who God picked from
nowhere and has placed him in a place of significance, Rev. Lawrence Tetteh.  Not knowing
that this man of God is the brother of this drug addict he (the drug addict) lifted his hands up
and cried to Jesus to do onto him as he has done to his brother. Thus, he also received Christ. This took place in Avenor in Accra.

The team is going back to Kisseman next two weeks and need our usual prayers. 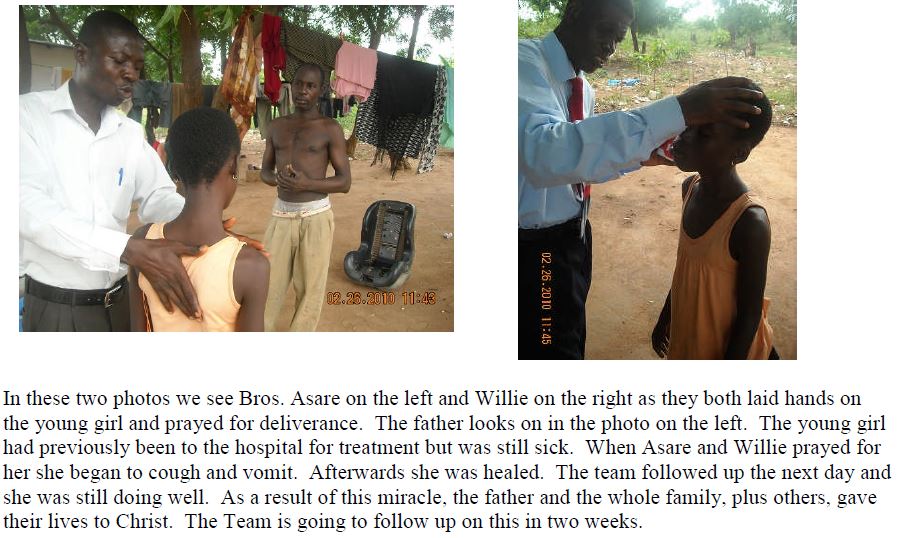