The above-named members of the Outreach team paid four days evangelistic working visit to Odumkyere, Amanfoso, a village in the Eastern part of Ghana. It is about 70 kilometres from the capital city Accra.

We started our mission work on Thursday evening at 7 pm with a film show about the birth, death, and the resurrection of Jesus Christ. We had a crowd of about 180 people, comprising of both adults and children. About 80 of them gave their lives to Jesus.

We continued on Friday morning with house-to-house evangelism to five different villages from Odumkyere. We deeply penetrated into their hearts with the gospel because of the problem of backsliding, false doctrine and unbelief. We won souls in almost every house that we visited. One sick woman was prayed for and she received her healing instantly. Another man by name Mr Daniel Okyere sowed a seed of five thousand cedis ($0.60) to the glory of God after we shared the gospel with him. We started another film show at 7pm. It’s a film that teaches about the final account of every soul. We followed it up with an all-night prayer. During the prayer, the team was led to pray for a sixteen-year-old girl from the spirit of death. We were led again to pray for an 84-year-old man by name Joseph Ansah to be lifted from his frequent dreams of being carried away by a flood.

Saturday morning was another day for house to house evangelism. We shared the gospel with believers, backsliders and unbelievers in the last four villages. A woman sowed a seed of two thousand cedis ($0.25) after ministering to her. We mounted up a stage with another film show on the hour of grace. Sister Fusenatu ministered the word of God and her life testimony of how God saved her from the Islam religion. Four people gave their lives to Christ after her ministration.

Sunday service was started at 8 a.m. at Emmaus Resurrection Church. Pastor Asare ministered the word of God. We organised the members after the service and told them to establish some church activities in order to keep the church active. We established morning devotion, women fellowship, Sunday school teachers and prayer warriors. God led us to establish leaders for all these activities. We laid hands and prayed for them all. We also counselled them on family and marriage problems. Handkerchiefs and cross chains were distributed among the children after some were laid on the sick as a point of contact. Some of them testified of instant healing. Glory!!!!!!!!!!! We later presented used clothes and pain tablets to them.

Our mission there brought about a lot of impact in the lives of the people of Odumkyere and the members requested that we should visit them as often as we can. The host Pastor also testified that our mission there has really brought a revival to the church and the entire village. 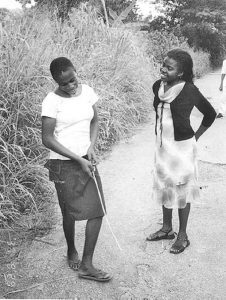