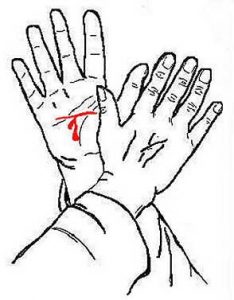 After walking around the two halves of the sacrifice the two men would meet in the center and would face each other.

Then each one would make a small cut in the palm of their hand and raise their hands into the air. Holding their hands high in the air so everyone could see they were entering in to a Blood Covenant, they would clasp them together. This is where the handshake began.

As they stood there with their hands clasped the blood of each man would mix with his covenant partner. As the blood flowed they were becoming “one” in nature. They were no longer two individuals fighting life’s battles alone. They had entered into a bond together that would last until death.

~ TODAY WE HAVE A BETTER COVENANT, AS PROPHESIED BY JEREMIAH 31:31 ~

IN THE NEW COVENANT:  Jesus Christ was the sacrifice. He died, was buried and rose from the grave. Then He ascended into Heaven where He now sits at the Right Hand of Father God. Now we become the Covenant Partner with God through Jesus by a confession of faith.