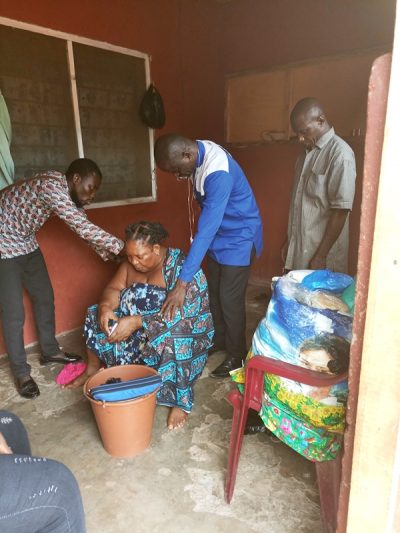 (Please note:  In this report there is mention of a”Juju god”.  Juju definition: an object venerated superstitiously and used as a fetish or amulet by tribal peoples of West Africa.  In the Western world we would call it an object of witchcraft.  The practice of Juju worship is prevalent in many rural areas of W. Africa.  The Gospel of Jesus Christ hasn’t reached every part of Ghana but with the leading of the Lord we will bring all, rich and poor, to the Cross of Jesus Christ and salvation.)

Now for the report:

Glory be to the King of Kings. We bless God for another powerful Evangelism experience.

Kwahu Miaso is in the North Eastern part of the Eastern Region of Ghana.  We got to Kwahu Miaso in the hours of 11:00 am on Wednesday,  July 3rd, 2019.

As we shared tracts and preached the Word of God, many hearts were turned to Jesus and two healings took place.

The daughter of the chief priest of the village had been very ill for a very long time.  We learned that she had accidentally stepped on their “Juju god” and it affected her spiritually, so much in fact that she was unable to talk or do much of anything but sit in a chair for over two years.  After we prayed for her she was able to talk normally for the first time in two years.  She was so happy she sang praises to God with us then she gave David 5 Cedis (about 92 cents in U.S. $) as an offering.  In this poor village, that was a considered a good amount.

Another woman had a severe stomach pain.  We prayed for her and she was also healed!